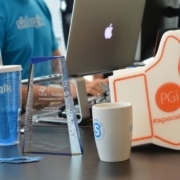 Short write up from one of the members of our team on us receiving another marketing award. Honored to have been part of founding one of the first influencer marketing platforms and guiding us through the first three years of growth.

Earlier this week Sideqik had the honor of being invited to the 2014 TAG Social Savvy Awards hosted by the Technology Association of Georgia. The ceremony was Emcee’d by Conn Jackson who showed off his shiny new Zappos shoes that matched his shiny smile and personality perfectly at the Georgia World Congress Center. With representatives from UPS to Turner Sports it was packed with the who’s who of Georgian companies leading the way in social media evolution.

The second annual TAG Social Savvy Awards kicked off with speeches from Jack Harris, President of Junior Achievement of Georgia, and Peter Stewart, Senior VP at PGi, who introduced this years keynote speaker Ryan Oliver (@RYNO) Brand Strategist at Twitter. Oliver delivered an amazing speech that gave us insight to Twitter trends, best practices, and what’s new. Throughout the speech Oliver also, without giving a second thought to it, showed us how much Twitter participates in partner marketing. Examples from Accura and Twitter’s new “buy now” technology made it very clear that any time a company uses Twitter, regardless if they are aware or not, they are engaging in partner marketing. Wowing the crowd with facts like every 48 hours brings 1.2 billion tweets to 255 million engaged users and inspirational thoughts like “Brands don’t have target markets they have target moments.” he set the stage for the award festivities to begin.

Awards presented throughout the night included “Innovation through Tapping Employee Wisdom” (UPS), “Using Social Analytics to Inform Business Results” (Turner Sports), and “Supporting Employees Using Social Media in their Daily Jobs” (The Weather Company) to name a few. The winner of the “Growing a Social Media by Being Authentic”, KontrolFreek, happens to be an early adopter of Sideqik’s platform and services. During the acceptance speech Matt Konigsmark, VP of Marketing, was kind enough to attribute some of their success in growing their social media efforts to Sideqik. Which was a perfect compliment for Sideqik as we were presented with the “Next Evolution of Partnership Marketing” Award.

Atlanta Technology Development Center’s (ATDC) General Manager KP Reddy gave an introduction highlighting CEO Kurt Uhlir’s alligator wrestling abilities and, more importantly, how excited ATDC was to have Sideqik alongside many other startups utilizing their incubator space. Kurt accepted the award on behalf of Sideqik with a rousing speech on how partner marketing, or together marketing as we like to call it, is becoming the most important way to market for companies of all sizes. Winning the “Next Evolution of Partnership Marketing” award is another incentive for Sideqik to continue helping and teaching others to make partner marketing work for them. We would like to thank the TAG Social Savvy Awards again for honoring us with this recognition.

Note: This article was originally published by Sideqik on Sideqik.com. Need a real influencer marketing program, check out their data-driven platform.

Want to join the discussion?
Feel free to contribute!

Welcome to my site – Who I am

In Startup Funding Search, Not All Investors Are Created Equal
Scroll to top